#07 TICINO LOWERING ON THE UPSTREAM 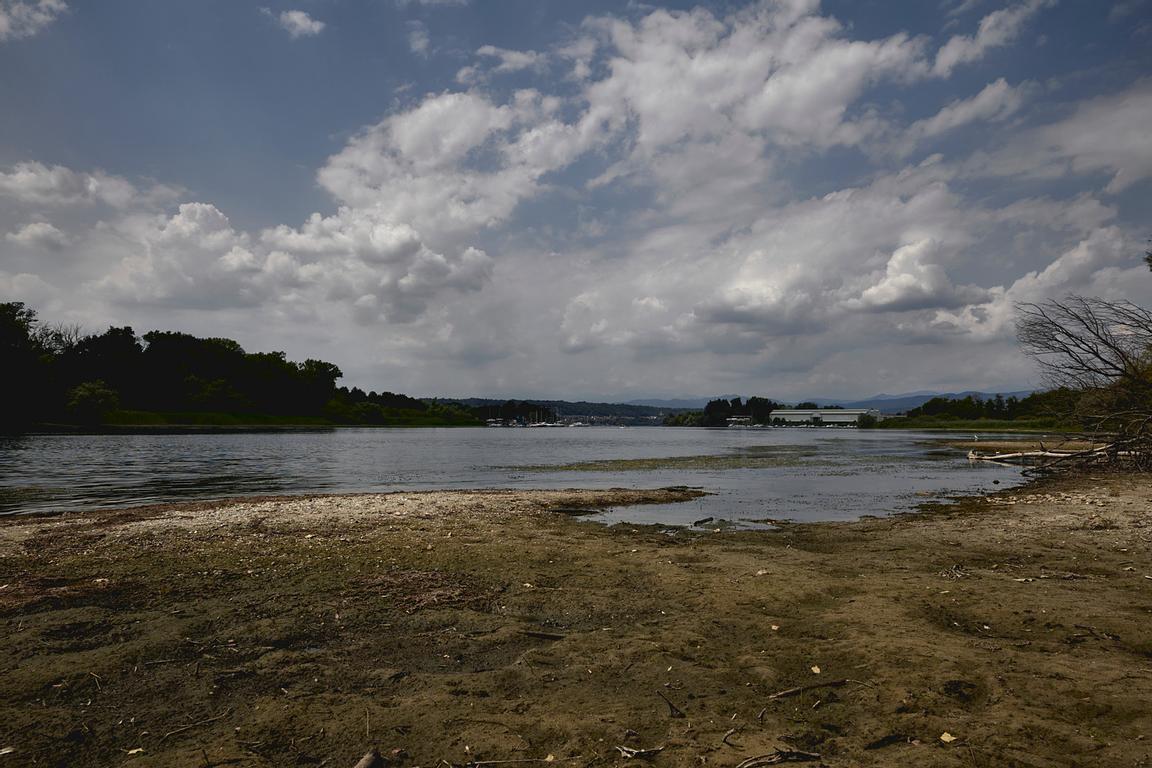 A view on Ticino river near Sesto Calende center, towards the direction of Lake Maggiore, with Verbella boat storage in the background.

#07 TICINO LOWERING ON THE UPSTREAM

I was supposed to return to Bereguardo (see my blog post on 18th July); with the park ranger Angelo as a mediator, a local man, Massimo, had agreed to take me to a tour on Ticino in his motorboat. When I recontacted Massimo to set the exact date, I sort of expected him to be at least doubtful about the navigability of the river. Instead, he sent me photos of swans and sunsets, apparently in an attempt to impress me with all the wonders that the river has to offer. I told him that I actually wasn't so much interested in the nature's beauty this time but rather in the critical spots on the river (which I expected to be many), but according to him the situation only was critical on the upstream and on the downstream, in any case far from Bereguardo. So it is possible to move on the river by boat? Yes. I said that I certainly wouldn't want to endanger neither him nor his boat, but Massimo didn’t seem to be worried in any way, and I figured that as a local man he of course knows the situation better. My questions must've made him reconsider though, because after an hour I receive a new message: "I'm on the Ticino. It's better to postpone [your visit] because it's only possible to navigate more or less 2km (1.2 miles)". Well, what a surprise. "Last week I got through, but [the water level] is down additional 25-30cm. Now you can't navigate without risking the keel and the propeller." 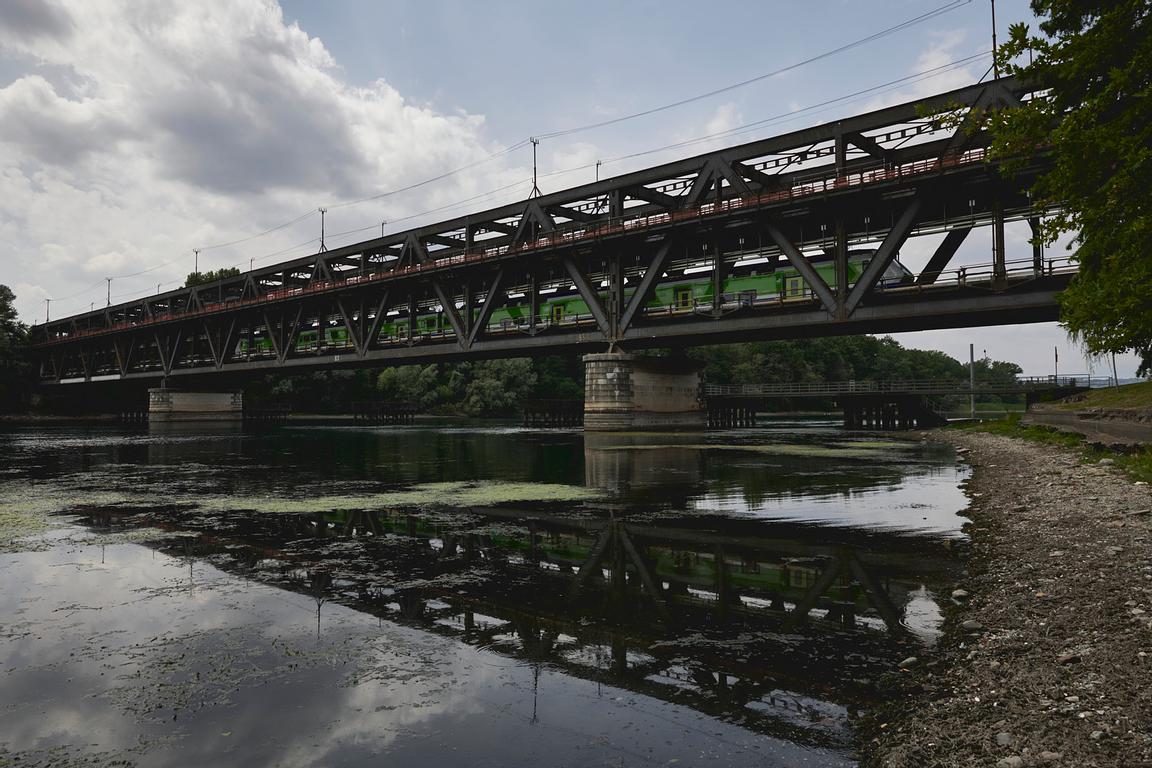 Sesto Calende; a train passing on the bridge over Ticino river that also functions as a border between Lombardy and Piedmont region.

So, given that my boat trip on the downstream was cancelled for the moment, I thought I'd pay a visit to the upstream, the point where Ticino exits Lake Maggiore, and loaded my bike onto a train headed to Sesto Calende instead. Clearly the proximity of the lake helps, as there was a lot less of the dryness of the grass and trees that I’ve been watching in Milan the entire summer.
From the station of Sesto Calende I cycled a couple of kilometres to Europa Park, which is more or less the point where Ticino begins in Italy after flowing out of Lake Maggiore. Everything seemed quite normal. There were some boats on the river going in both directions, as well as on the lake; like a group of young men on a motorboat with hip-hop blasting from the loudspeakers was going to the Sesto Calende direction, and a group of middle-aged men on a sailing boat was going towards the lake. Inside the park, a group of children was crossing it carrying canoes in pairs to the dock, apparently for a canoeing class. 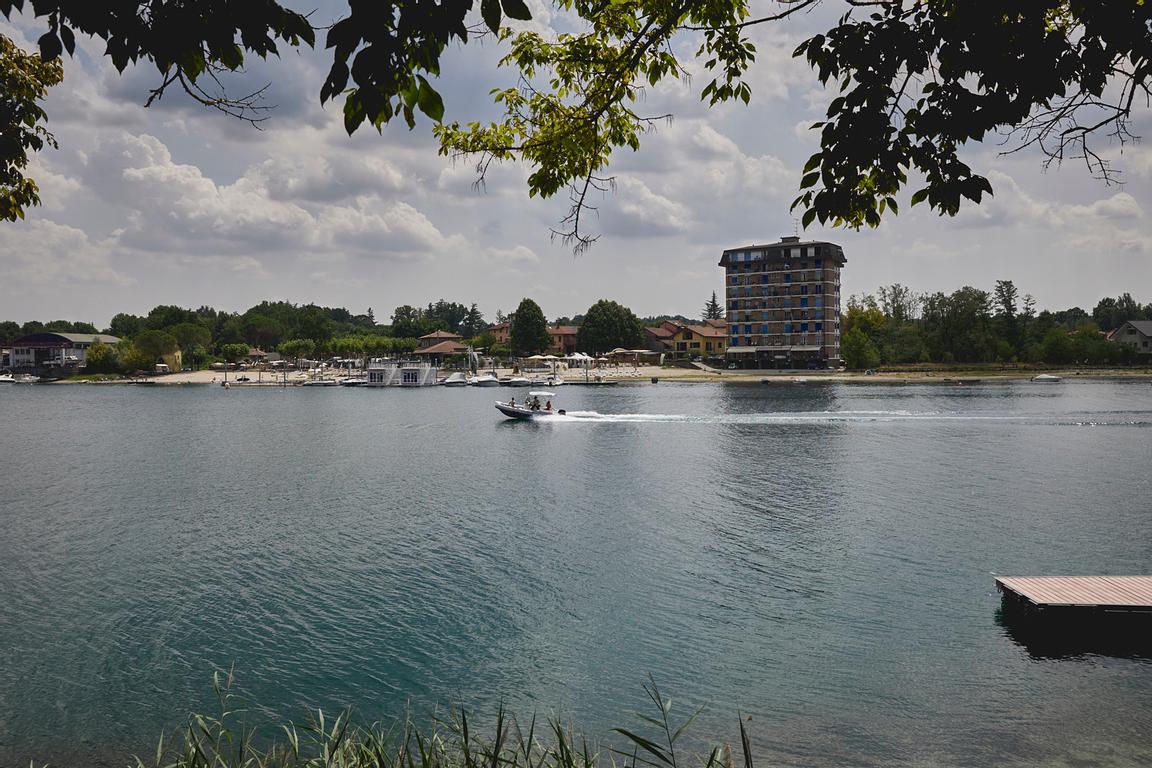 A view from Parco Europa over the first portion of Ticino after it has exited Lake Maggiore (further on the right outside the image). Here on the upstream of Ticino, navigating is not any issue yet, and the local youth can enjoy their day on a boat.

However, even if things seem pretty normal, it doesn’t necessarily mean that they are so. The water data gathered at the Sesto Calende gauging station shows that the level of the lake has been below the average the entire year, sometimes even going below the minimum reference value (in mid-June). The same applies to the flow rate—actually it’s even worse; the rate has been mainly following the historical minimum rates, and as I’m writing this, the today’s rate is below that reference value. The newspapers are reporting on reports about the levels of all the region’s lakes being lower and lower as the summer proceeds. 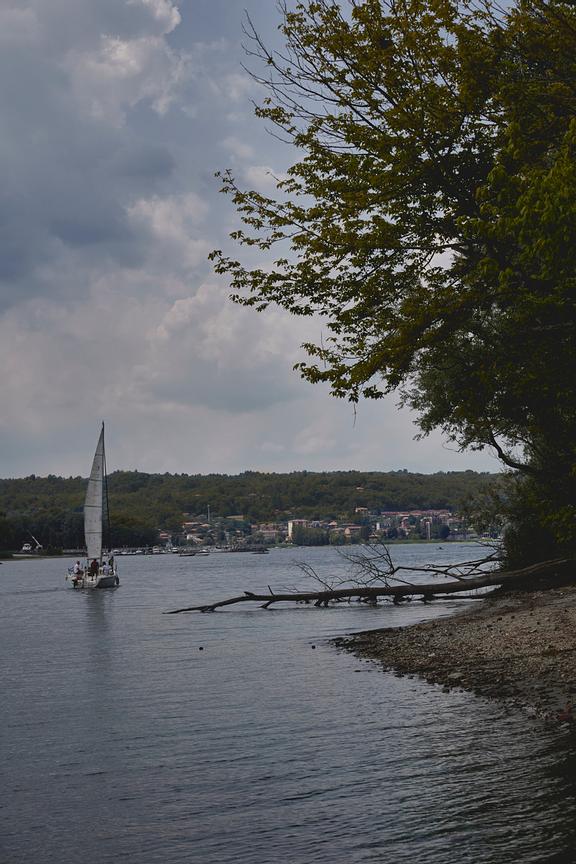 A view from Parco Europa over the first portion of Ticino after it has exited Lake Maggiore (the boat is heading towards the lake). Here on the upstream of Ticino, navigating is not any issue at least yet. 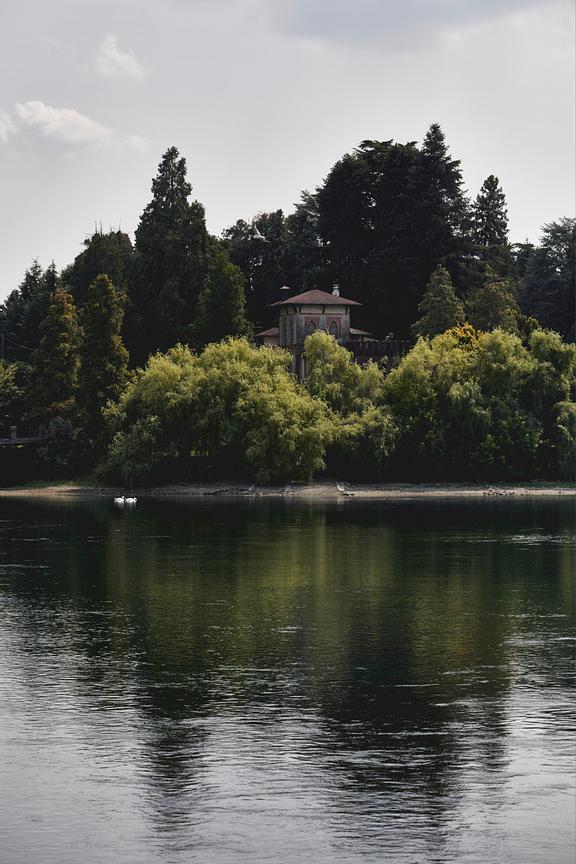 A private villa on the Piedmont side of Ticino seen from the promenade in Sesto Calende.

I stopped for a cold drink at Verbella, a large storage facility for private boaters. The barman hadn’t heard of any restrictions on navigating in the area so far, but he pointed at a strip of sand with reeds growing next to it across the bay: “That should be under water.” 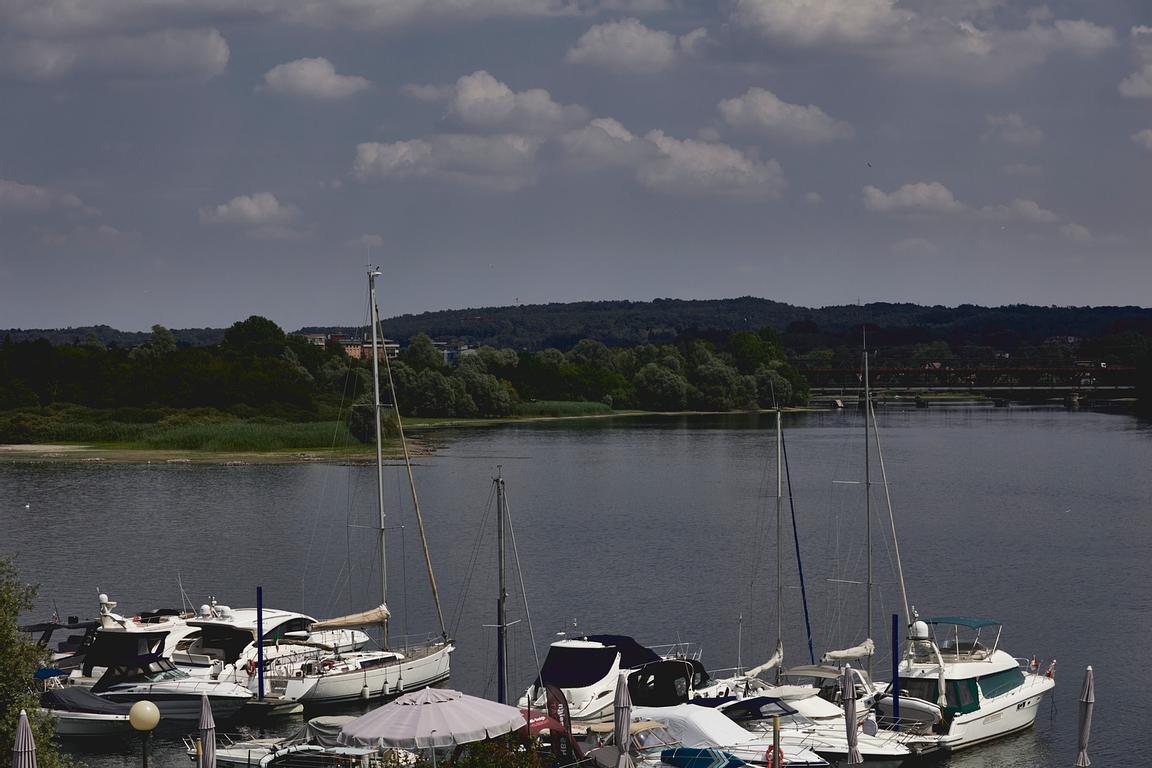 View on Ticino (and towards the bridge that goes from Sesto Calende to the Piedmont side of the river) from Restaurant Verbella. The barman told that the piece of land in front of the reeds wasn’t visible before.

Also close to the center of Sesto Calende there are suspiciously wide sand strips near the river—with an addition of light green algae coverage on the water near the shore. The low water level is visible also in front of the villas on the Piedmont side across the river*. Lenza (one of Ticino’s tributaries) that runs through Sesto Calende isn’t in good shape either. The local chapter of Italian environmental organization Legambiente has been reporting about its low level for some time already, and what’s left of the stream near the railway station is largely covered with that light green mush. 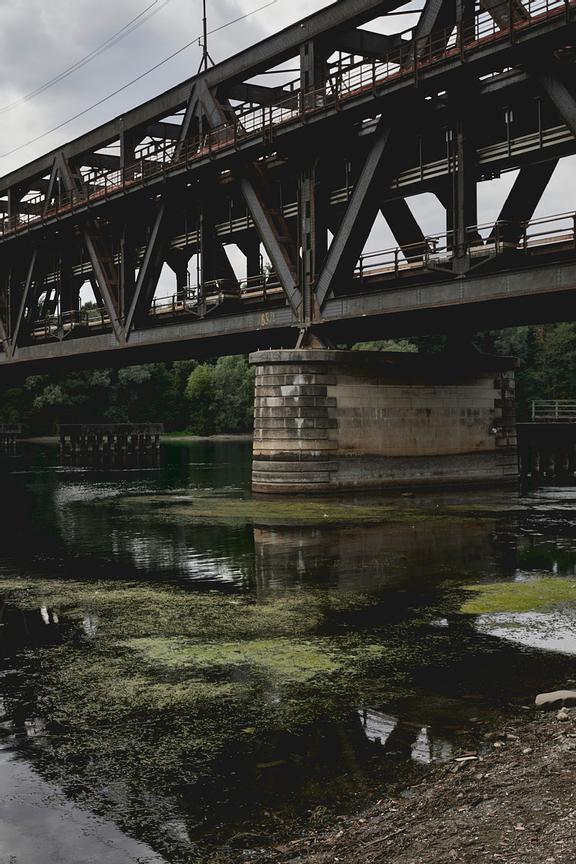 Bridge over Ticino river that also functions as a border between Lombardy and Piedmont region. 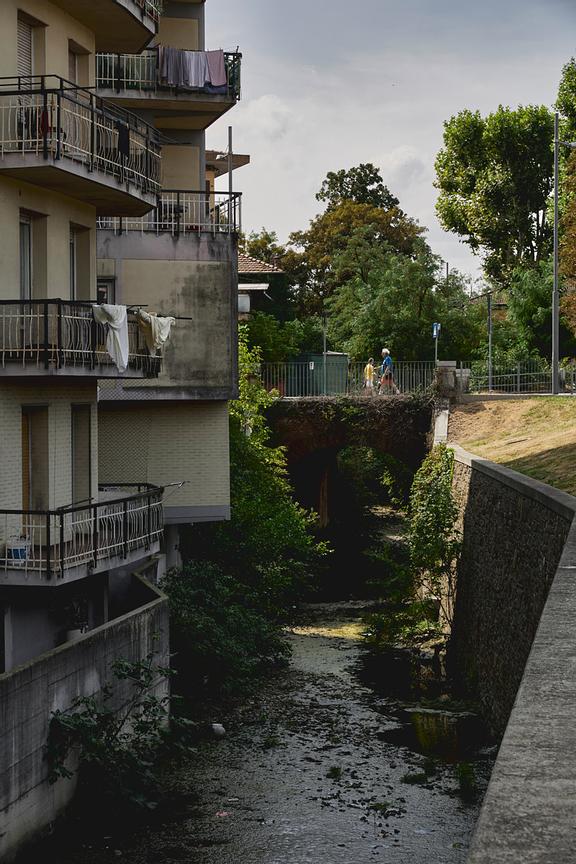 The Lenza brook that runs through Sesto Calende before joining Ticino a little outside the town center. The level of the brook is visibly lower than usual everywhere, and near the railway station it also is covered with algae.

The excessively hot period seems to be over, but that doesn’t mean anything. If it doesn’t rain, the water scarcity continues.

*The border between Lombardy and Piedmont regions runs in the middle of both Lake Maggiore and River Ticino, following its oxbows, almost down to the town of Vigevano.