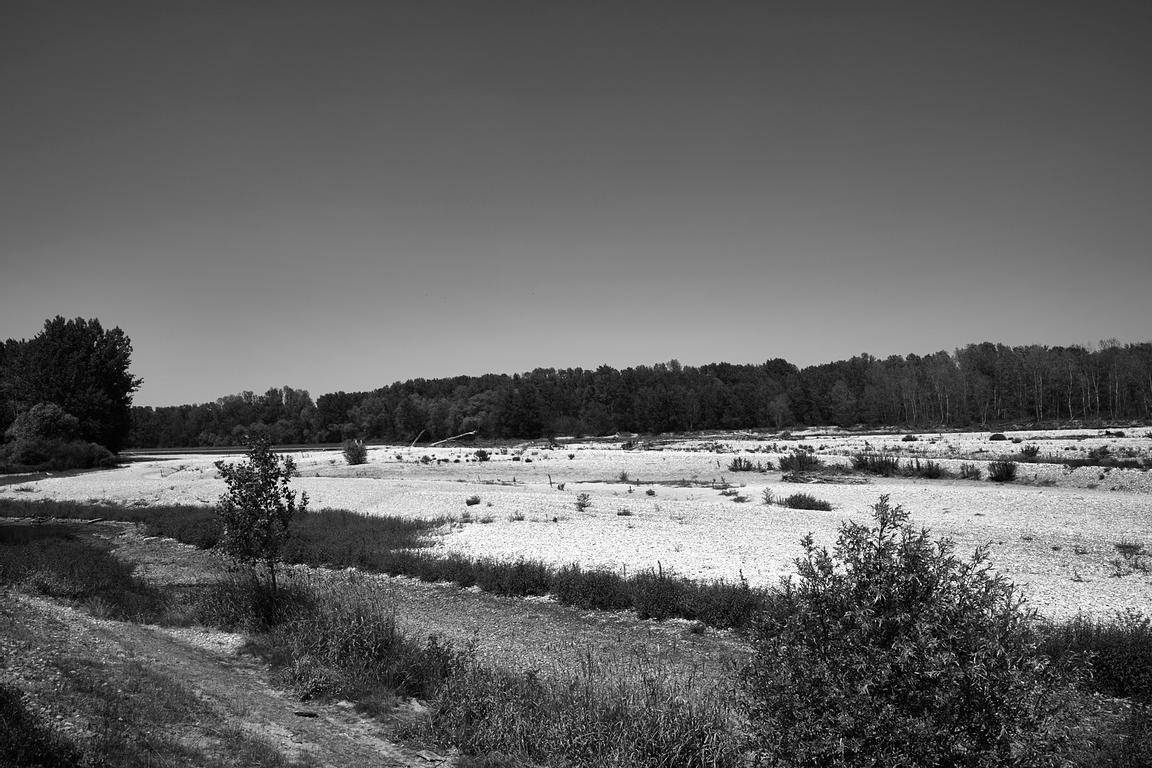 Riverbed of Ticino between Bereguardo and Pavia in mid-July 2022

Shortly before Pavia, the train runs past bright green rice paddies, with some darker green corn fields here and there; apparently the irrigation still works in the area. The spots where the crop has already been harvested provide a striking contrast to the healthy greens; the piece of land with nothing growing on it anymore has been left to its own devices, and given that there has been no rain, it’s just yellowish and beige burnt stubble with dry soil underneath.
Few weeks ago, when the signs of drought started to intensify, some towns in the Northern Italy banned filling private pools and irrigating gardens, vegetable or otherwise. Ever since, I’ve felt guilty nearly every time I take a shower (or consume water in any way, for that matter), but a phone call with Italian environmental organization Legambiente Lombardia’s press officer Silvia Valenti eases my guilt a little: “The domestic consumption is just a drop in the ocean; intensive agriculture is the bigger problem.” 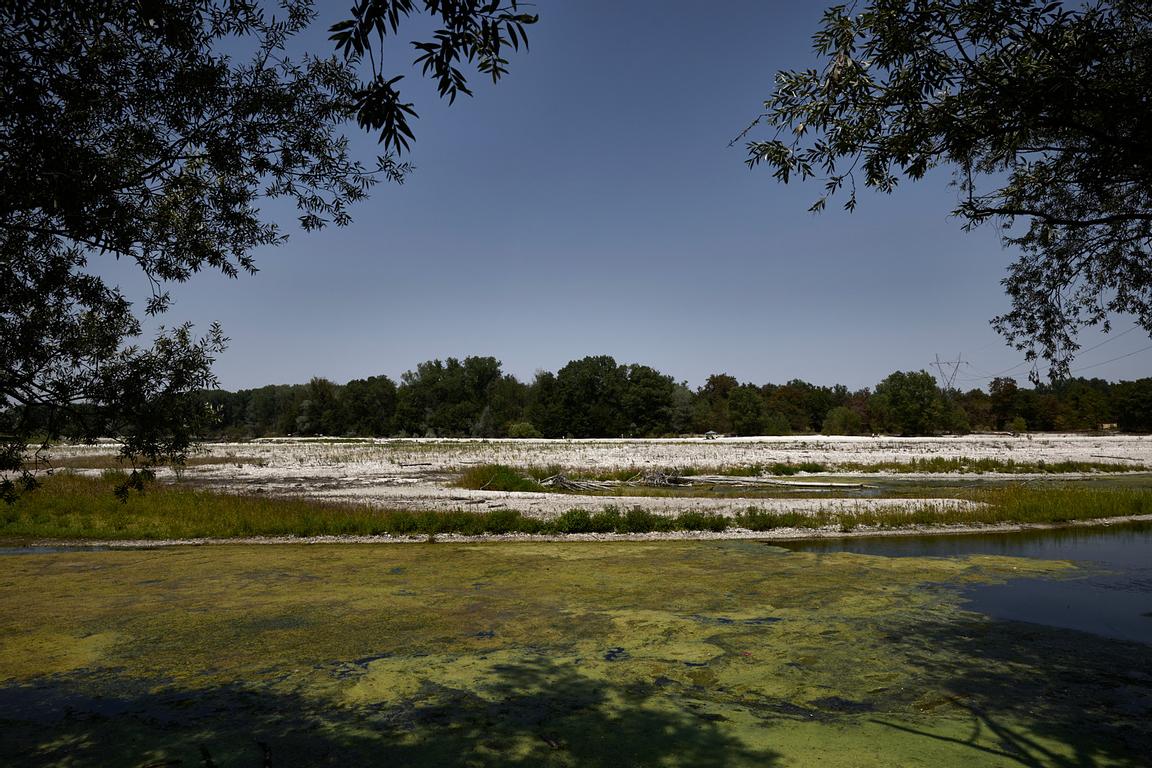 The view over the river (in the foreground, covered with algae) in front of the Onda Splash water park.

Besides for the agriculture to produce food for human consumption, water is needed also to generate energy; as Legambiente reminds in their report published on July 15th, the drought and the heat may soon have a significant impact on the electrical grid. At the same time, retaining the water for the needs of energy production means not only less water to the agriculture but also a potential effect to rivers’ ecosystems due to pollution concentration as well as eutrophication and overheating of the waters. Valenti explains also that part of the agricultural produce is designated to obtain biomass that will then be burned to generate energy; the problem is that that cultivating requires a huge amount of water—and the generated energy isn’t even renewable.
Also Ticino River feels the impact of the drought. The waterway starts in Switzerland, runs through Lake Maggiore (have you read Hemingway’s ‘A Farewell to Arms’? that lake), and then proceeds to south bearing slightly to south-east, and shortly after Pavia it joins the Po River. Due to little amount of snow in the past winter there is less water also in Ticino, and it shows, at various spots along the river. 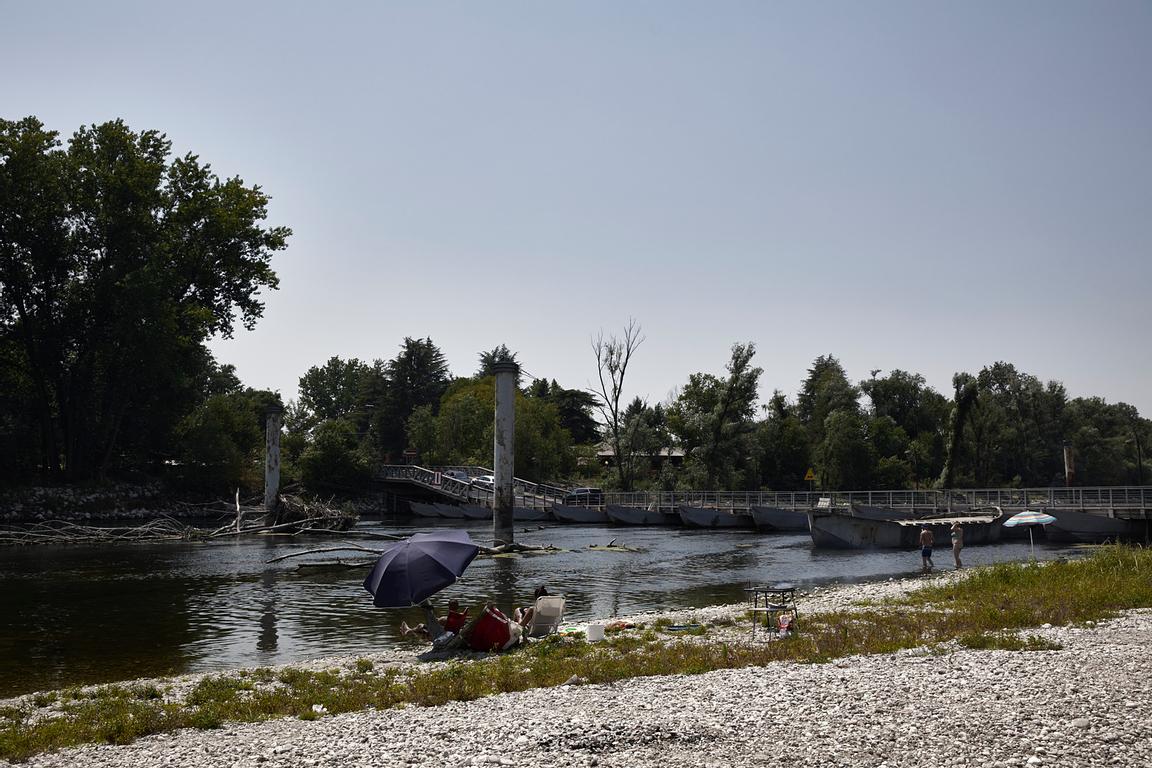 The pontoon bridge of Bereguardo that goes over Ticino River is lower than usual. Water should almost cover the pieces of wood that are around the left pillar; only the tips should be visible. During the normal spring and autumn floods (due to snow melting in the mountains and the autumn rain, respectively), the water is even higher.

In Bereguardo, a small town few kilometers north-west from Pavia, there’s a pontoon bridge over the river, but it doesn’t seem to be floating at all. There’s over one meter (3 ft) water “missing”. “Can you see those logs? We should only see their tips; water level should be that high,” explains Angelo Maggioni, one of the volunteer park rangers of the area.
The bridge area is also a popular bathing spot, and many people have brought their barbecues too. That is allowed near the water (and the air is dense with the fumes), but Angelo goes to have a word with a group of people barbecuing near a tree, a bit further from the waterline. Any forest fires are definitely the last thing anyone needs.
There may be water usage bans in place, but apparently they don’t apply to public pools, at least in this area; driving past the Onda Splash water park's fence you get a glimpse of a huge amount of people crammed inside. Few meters from the fence, a portion of Ticino is nearly still, with light green algae covering it. 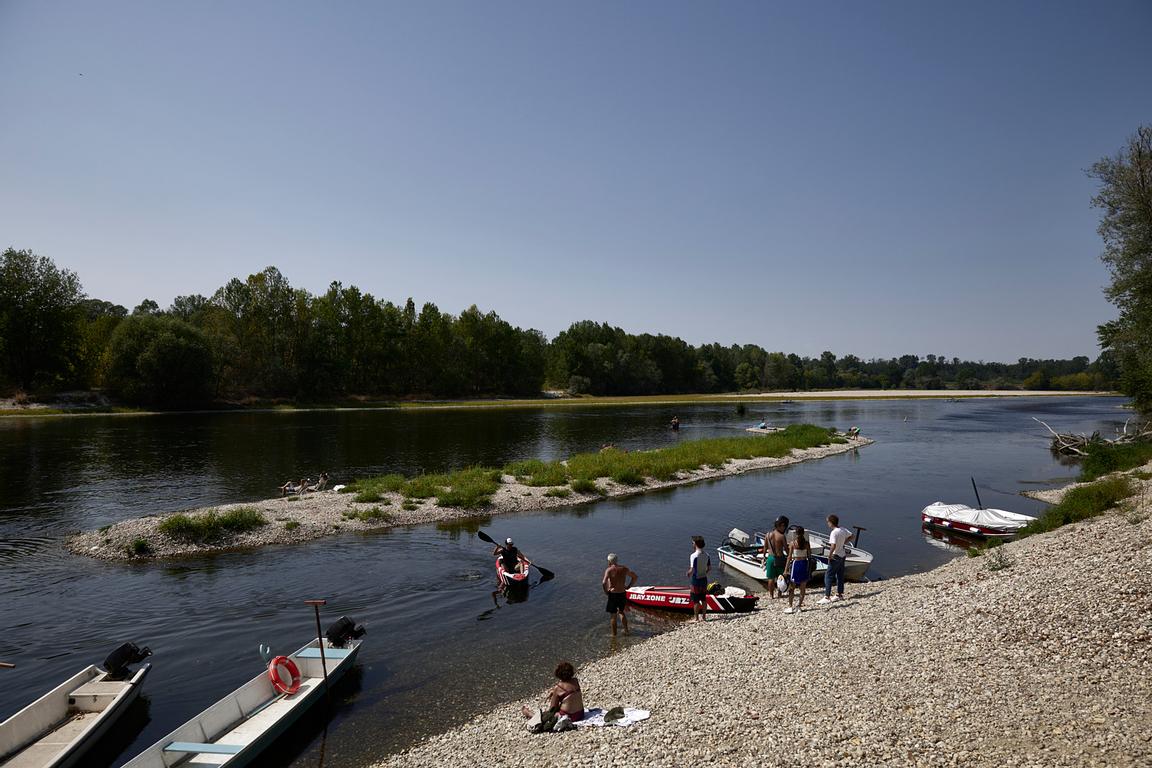 A popular bathing and canoeing spot in Canarazzo. The water should be at least 2 m (6.6 ft) higher, and the “island” in the middle shouldn’t be visible.

In Canarazzo, at another popular bathing and canoeing spot, some people have taken their sunloungers onto a strip of land over 10 meters from the shore; that strip shouldn’t be visible. “The water level is at least two meters too low,” says a local man enjoying his day on the riverbank. In addition to the water coming down from the mountains, "there used to be underwater springs in the river; you could drink the water from river,” he claims. “Now it’s all contaminated.” 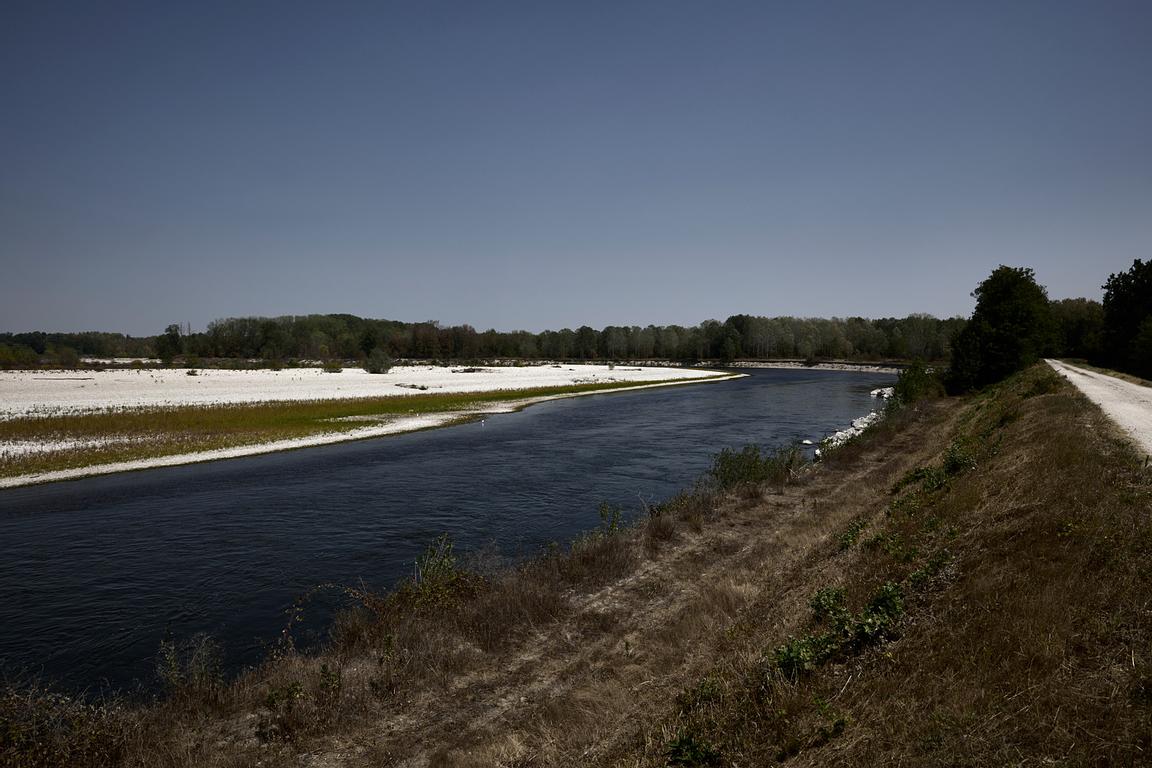 A view over Ticino near Cascina Venara; the grass between the embankment road and the river is all burnt due to the lack of rain. In the distance, on the curve of the river can be seen cement that’s been placed there to stop the river from eroding the right bank.

“Sure, it’s normal that it’s dry in mid-July—but not this dry,” remarks Angelo pointing at the vegetation near an oxbow few kilometers from Bereguardo. The slope from the embankment road down to the riverbed is mostly covered with completely burnt brownish grass. In the distance, further down the stream, you can see all the cement blocks laid there to stop the river eroding the right bank. “If the next winter there won’t be a lot, a really lot of snow, the next year will be catastrophic.”