#03 "WHITE DEATHS" – THE BLACKEST OF EUPHEMISMS 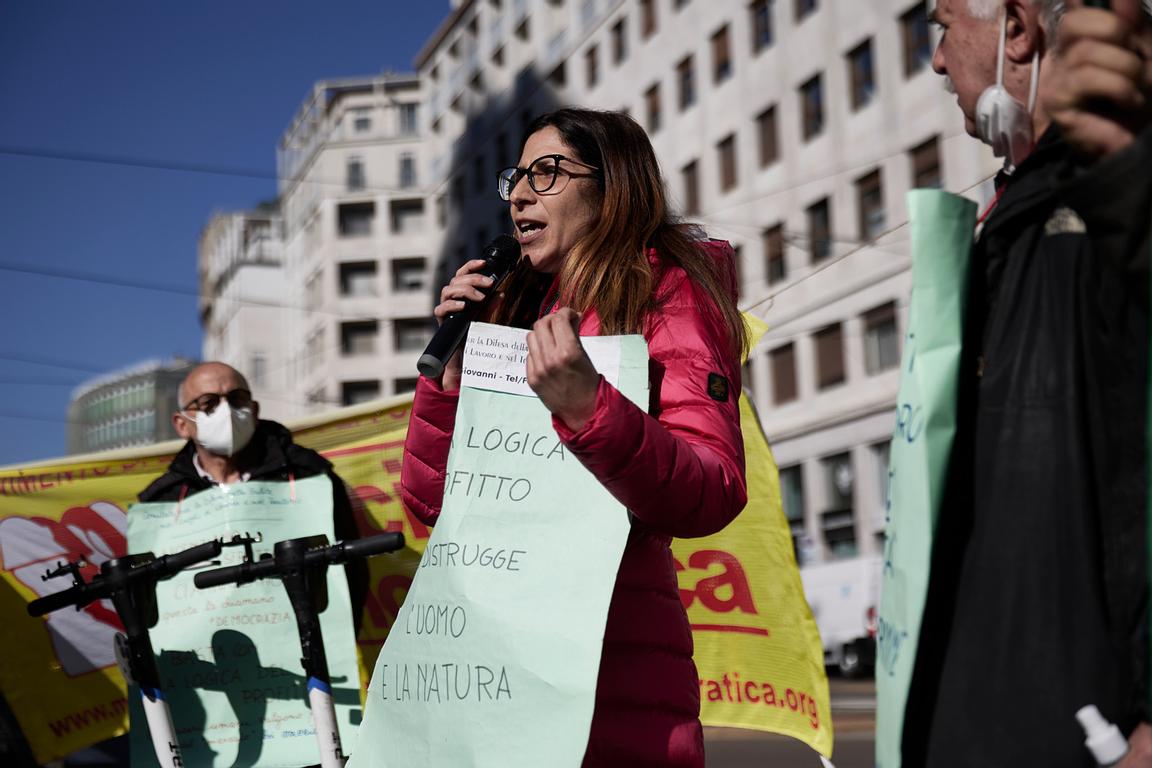 Carmen describing the workplace accident that killed her partner

#03 "WHITE DEATHS" – THE BLACKEST OF EUPHEMISMS

"My name is Carmen." She started to hold back tears as soon as she took the microphone, gazing into space in front of her and clenching the fist of her free hand hanging by her side. "Angelo Di Napoli was my partner." She then went on to describe the workplace accident in October 2019 that first had caused her partner to go into coma and then pass away 210 days later. "He left a two-year-old child, and a baby who was yet to be born. And so, his life was destroyed—he was 36—as well as ours." She told the audience that she hoped that one day workers would have the possibility to refuse a task assigned to them because the task was too risky. "Angelo would've never said 'no'. Because he would've earned a reputation as someone unwilling to work. Or someone else would've done the job anyway."
Carmen was speaking at a demonstration to protest against the workplace fatalities. The demonstration was held in front of the offices of Assolombarda, (a territorial association of enterprises in Milan and few adjacent municipalities); the place was chosen because demonstrators blame the business owners and their pursuit for profit for workers' deaths. 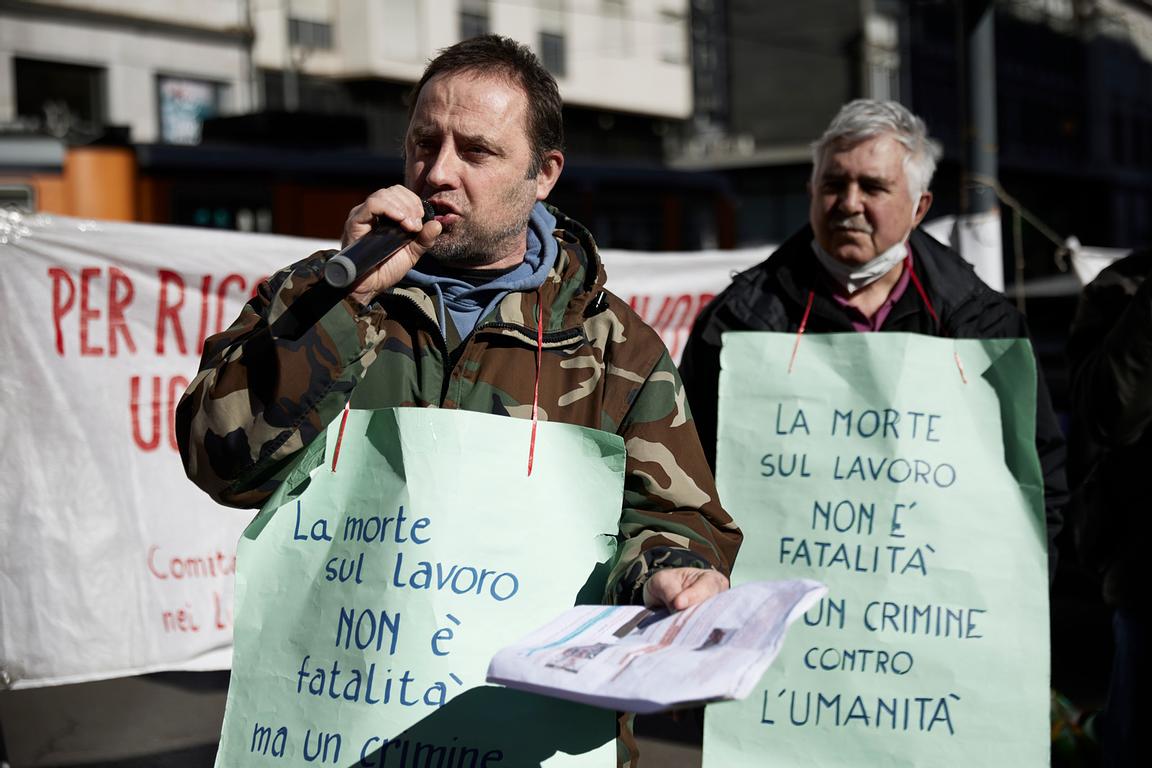 Luciano Pasetti, a trade unionist and a Carrefour supermarket worker delivering a speech. The signs read "A workplace death isn't a fatality but a crime against humanity".

Reading newspapers in Italy, you can't avoid the regular terrible news about the deaths of workers who have fallen from heights or into something deep, or who have been hit with something extremely heavy, or whose clothes have gotten stuck between moving machine parts. The victims are both men and women, and even teenagers to whom the accident has perhaps happened during an internship period, the so-called "school-work alternation". In 2021, the total amount of reported fatal accidents at a workplace in Italy was 1,221*. That's at least three deaths a day—three people who didn't come back home from work. Many of the victims are industrial workers, doing heavy work that's supposed to have all kind of protections in place. Except that on that fatal day corners were cut—possibly "as usual"—with disastrous consequences. In Angelo's case, he and his colleague were lifting and moving a transformer "with two jacks, because a crane would've been too expensive".
Statements are issued every time after a particularly gruesome death—including from the decision makers—demanding that 'this must end' and 'things must change' and so on, but the statistics of these "white deaths", as they sometimes are called in Italy, continue to be more or less the same. On the day I was completing this text, I read about a 22 year old who had died while mounting a cableway in a forest. The owner of the business responsible for the work was his father.

Milan, Italy, 7 December 2015 — Clockwise from top left: Trade unionist Roberto D’Ambrosio delivering a speech. – The crosses bear the job titles (such as carpenter / set builder, choir singer) of persons who have died due to an illness after having worked at Teatro alla Scala (seen in the background on the right). – The wall banner depicts a stage with the orchestra in front of it; the text on the set piece reads “Workers killed by asbestos”, and the characters say “It must be a tragedy.” “No, it’s a disgrace!!”

Another category is more invisible, and more difficult to both prove and thus quantify: workers who are exposed to dangerous substances during their work, giving them for example a cancer later on. (Moreover, today the situation for cancer patients has of course deteriorated during the pandemic; reports everywhere lay out the grim reality of delayed or cancelled treatments, again, with disastrous consequences.)
An organisation whose workers have even taken their management to court is the world-renowned opera house Teatro alla Scala that has seen a number of deaths due to cancer. According to the workers the reason is asbestos that was previously used in the building's structures (including the old front curtain "filled with asbestos"). Indeed, among the victims there have been cases of mesothelioma, which is a form of cancer usually associated with exposure to asbestos.
Italian trade union C.U.B. filed a report about asbestos related deaths at La Scala the first time in 2009. The prosecutor started to investigate the case in 2012, and the trial started in 2014. However, in spring 2021, the court of Milan acquitted all defendants, on the grounds of 'no case to answer'. (The verdict can be appealed.) 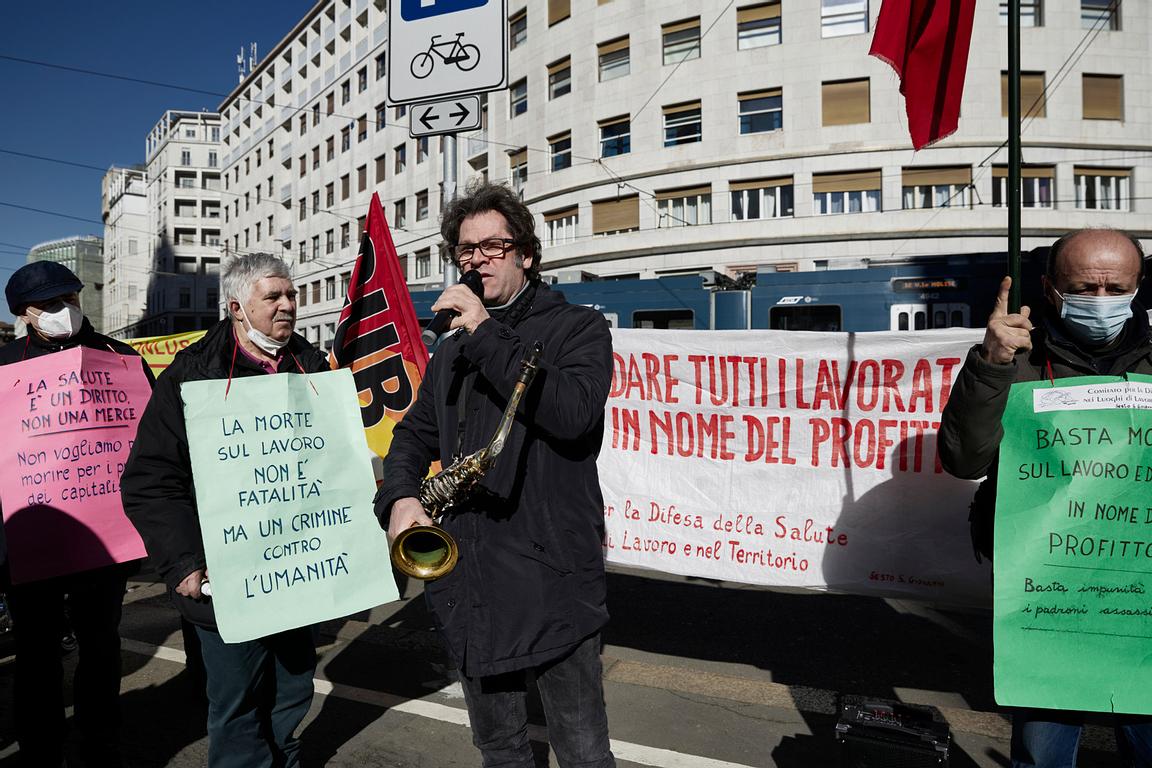 Roberto D’Ambrosio, electrician at the Scala Theater and a trade unionist,telling about the asbestos trial at Teatro alla Scala.

One of the speakers at the demonstration was Roberto D'Ambrosio, an electrician at Teatro alla Scala and a trade unionist for C.U.B. He is disappointed with the verdict: "It's absurd that the 15 workers who had always worked at La Scala and who fell ill while working there, aren't being recognized [as persons who have died because of their working conditions]." D'Ambrosio considers the trial "false and biased" and invited the audience to participate “in the mobilisation when the appeal process starts”.

Two teenagers taking photos with their phones in front of a tarpaulin covering renovation works. The tarpaulin has statements regarding Lorenzo Parelli, an Italian teenager who died in January 2022 in a horrible workplace accident, on his last day of an internship period called “school-job alternation”; his death sparked student protests across Italy. The texts read “Enough with exploiting”, “Lorenzo lives” and “Alternation kills”.

Cycling back home from the demonstration, I happened to notice text sprayed on a tarpaulin covering renovation works of a building; the texts were statements related to the tragic death of 18 year old Lorenzo Parelli who died in January at a workplace accident on the last day of his internship in a factory. In addition to a nationwide shock, his death fuelled the demonstrations of students, already protesting against their current conditions at schools and universities. As I was taking photos of the tarpaulin from the other side of the street, three young girls, more or less the same age as Lorenzo, stopped in front of it. Oblivious of me and my camera, as well as the texts behind them, two of them started taking photos of something on my left with their phones. After hearing all the stories and declarations at the demonstration I found myself being happy for them being just young people spending happily a sunny afternoon with friends—instead of, say, attending the funeral of their classmate who has died in a workplace accident.

*Source: https://www.inail.it/cs/internet/docs/alg-dati-inail-2022-gennaio-pdf.pdf. Other sources report ca. 200 persons more. The reports are also subject to verification of whether it really can be considered a "workplace accident", and the number of verified cases is less. The above number also includes the deaths that have occurred while commuting.